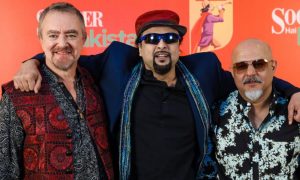 To celebrate the 20th anniversary of their immensely popular Azaadi album, three of Junoon’s former members namely Ali Azmat, Brian O’ Connell and Salman Ahmad, have come together for a new video for the track Khudi.

While fans still eagerly wait for the band to reunite and produce new and original music, they are reliving the rock band with this rendition for now.